LEDdynamics, a custom engineering company located in Randolph, VT, specializes in the design and integration of LED technology for end-user and OEM applications. Their breakthrough EverLED-TR fluorescent tube replacement has earned Popular Science’s “Best of What’s New” and EC&M’s “Product of the Year” awards. Recently, the company called in VMEC to assist with a customer request for increased pieces per shipment.

Bill McGrath, president of LEDdynamics, met with Dan Shea, VMEC Professional Manufacturing and Business Growth Advisor, in late summer to explain their need for assistance increasing shipment of parts for a large, important customer. The customer was requesting that 1280 pieces (10 boxes) be shipped per day when current shipping was 640 to 768 pieces per day (or five to six boxes).

The VSM targeted a number of issues and corrective actions were initiated. One of the actions included having more potting production jigs fabricated and repairing existing ones. Another action was to move the final Quality Assurance test and visual closer to the production line. And another was to experiment with a new design for the breakout jig.

The next step was to observe the processes, focusing on the common “eight wastes”, including defects, overproduction, waiting, non-utilized employees, transportation, inventory, motion and extra-processing. A ‘spaghetti diagram’ of the production area was created as shown below.

A new layout was created based on observations and conversations with production employees. The new layout consolidated the assembly processes and allowed for visual management of the line. Working with production management, engineering and the project manager, the new line was put in place and tested. The batch size was reduced, kanbans (visual signals for replenishment) were incorporated into each station, and several production people were cross-trained to allow for floating between work stations. The burn-in fixture was modified to allow for smaller batches and the amount of production jigs for final assembly was reduced. Production in the subassembly and final assembly were tracked using a day-by-hour board to allow for real-time feedback. New jigs and lights were added to the line. Examples of a new station with day-by-hour board follows.

Company-reported results as of the end of November consisted of the line averaging 10 boxes per day. Some days the line accomplishes 11 to 12 boxes a day and many times is three days ahead of customer requests. William McGrath, LEDdynamics, Inc. President / CTO states, “We needed help quickly to meet the customer’s increased demand. We were only able to improve so much on our own. VMEC quickly responded with expert outside help and within a short time we were able to meet demand and cost per unit was reduced as well. All the folks were involved in the process and now have a sense of ownership that makes the work more satisfying.” 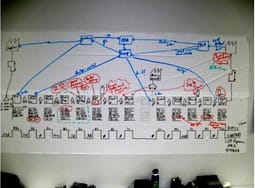 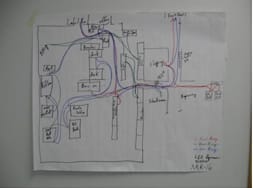 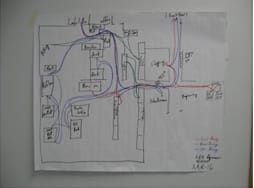 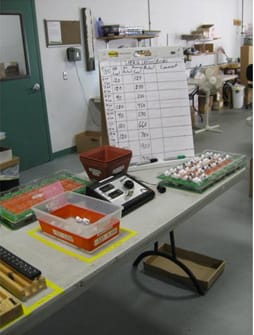