Manufacturing really matters in Vermont and
across the United Sta

VMEC has identified the following resources and compiled the following FACTS about Vermont and U.S. manufacturing of likely interest to our local manufacturers, the broader business community, VT Government Leaders, Legislators, students, citizens and job and career seekers.

These facts and resources all paint a very clear picture that underscores the vital importance of manufacturing to the Vermont and national economies.  The creation of ‘value’ through a thriving and growing manufacturing sector is a proven road to economic prosperity.

This dashboard provides a snapshot of how the state’s economy is performing in general, and in particular in the manufacturing sector.  The Dashboard provides independent and objective data on how Vermont’s manufacturing sector is performing in eight main areas, and helps leaders focus on a few key metrics most important in measuring the sector’s economic progress and talent needs. It covers recent trends and will be updated on a regular basis. It is designed to track state economic performance and to spark conversations about building a more competitive manufacturing sector.

Note: If a data window/ cell contains a “+” symbol, be sure to click on the “+” to access additional valuable information and data.

Economic Multiplier:  Every $1 spent in manufacturing adds another $1.82 in economic activity – the highest of any other economic sector.

Recent research suggests that manufacturing’s impacts on the U.S. economy are even larger if we consider the entire manufacturing value chain, plus manufacturing for other industries’ supply chains. That approach estimates that manufacturing could account for 33% of U.S. GDP and employment. Along those lines, it also estimated the total multiplier effect for manufacturing to be $3.60 for every $1 of value-added output. (Source: Manufacturers Alliance for Productivity and Innovation (MAPI))

Nearly all of Vermont’s manufacturers are considered Small-and Medium-Size Enterprises (“SMEs” or” SMMs”) with less than 500 employees. By federal definition, a “large” manufacturer is considered an enterprise with >500 Full Time Equivalent (FTE) employees. 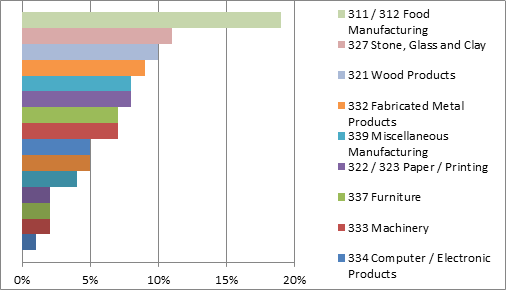 About seventy-one percent (71%) of Vermont manufacturers are in Rural (RUCC code 4-9) counties and about twenty-nine percent (29%) in Urban counties, with Urban defined as counties with a Rural-Urban Continuum Code of 1 to 3.

The majority of Vermont’s manufacturers, about thirty-three percent (33%), are located in the northwest three county “Urban” area (Chittenden, Franklin and Grand Isle). 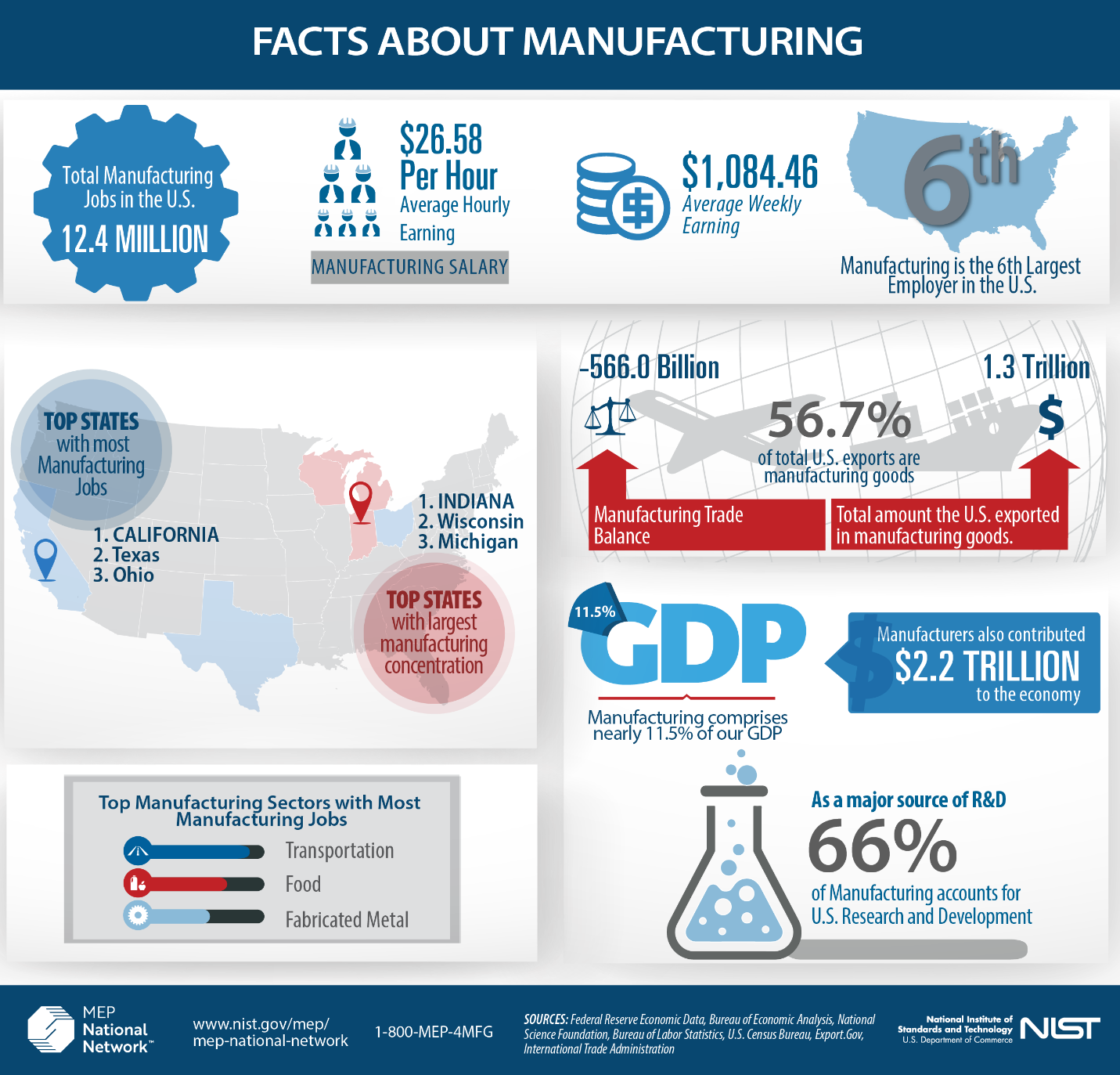 In the most recent data, manufacturers contributed $2.38 Trillion to the U.S. economy in the fourth quarter of 2018. This figure has risen since the second quarter of 2009, when manufacturers contributed $1.67 Trillion. Over that same timeframe, value-added output from durable goods manufacturing grew from $0.87 Trillion to $1.33 Trillion, with nondurable goods output up from $0.81 Trillion to $1.06 Trillion. (Source: Bureau of Economic Analysis)

The majority of manufacturing firms in the United States are quite small.  In 2016, there were 249,962 firms in the manufacturing sector, with all but 3,837 firms considered to be “small” (i.e., having fewer than 500 employees by federal definition). About one-third (33%) of these firms have fewer than 20 employees. (Source: U.S. Census Bureau, Statistics of U.S. Businesses)

Since the end of the Great Recession, as of 2018 manufacturers have hired an additional ~ 1.37 Million workers. There are about 8.05 million and 4.77 Million workers in durable and nondurable goods manufacturing, respectively. (Source: Bureau of Labor Statistics)

Looking specifically at wages, according to the latest figures, the average manufacturing worker earned more than $27 per hour, not including benefits. (Source: Bureau of Economic Analysis and Bureau of Labor Statistics)

Manufacturers have one of the highest percentages of workers who are eligible for health benefits provided by their employer. Indeed, 92% of manufacturing employees were eligible for health insurance benefits in 2018, according to the Kaiser Family Foundation. This is significantly higher than the 79% average for all firms.

Moreover, according to recent research, the lack of qualified talent could take a significant bite out of economic growth, potentially costing as much as $454 Billion from manufacturing GDP in 2028 alone. Between now and 2028, a persistent skills shortage could cost $2.5 Trillion in reduced output. (Source: Deloitte and The Manufacturing Institute)

Despite a stronger dollar, slowing global growth and lingering trade uncertainties, U.S.-manufactured goods exports were up 4.7% and 5.6% in 2017 and 2018, respectively. (Source: U.S. Commerce Department)

The manufacturing sector has long been a catalyst for U.S. strength in disruptive, breakthrough innovations. The resulting new and improved products and technologies have shaped existing industries and been instrumental in the formation of new markets.