ExporTech takes a small Vermont company to a foreign land

Vermont exports are down, the task of entering the export market can be daunting for a small Vermont company and some Vermont companies have been,exportechservicelogo frankly, ripped off by foreign entities. But a new-to-Vermont effort is generating intensive interest and initial success for a program called ExporTech.

ExporTech was started by the National Institute of Standards and Technology (NIST) to bolster local exporting efforts for small companies and support the local exporting landscape.

When officials from the award-winning innovator BioTek Instruments went to China they found many of their products. Only they were unlicensed imitations of the Winooski firm’s high-tech products. Hubbardton Forge in Castleton has battled the same issue with its one-of-a-kind lamps.

BioTek is now using its expertise (“don’t use exclusive distributorships”) to help other Vermont companies find their way in the maze of exporting logistics, legal, cultural pitfalls, Website design (some like it wordy), trademarks, compliance (CE mark for the Euro zone), financing, sales channels, monetary exchange, translation, and, ultimately, “how do I get paid?”

BioTek, for instance, designs, manufactures, and sells microplate instrumentation and software to aid life science research and facilitate drug discovery. It found that while trying to keep China from duplicating its hardware might be impossible, it could always stay ahead in software. This is the kind of hard-won experience available in the ExporTech process.

“It’s a well-vetted, tested program,” Horseman said, which is consistent with the data-driven NIST. NIST started it in 2007, just as the Great Recession was bearing down on the US. In part for that reason, Vermont only started its program this year when Brent Raymond, Vermont’s International Trade Director, enlisted several partners to offer a spring and fall program. Raymond was able to get a grant from the Northern Borders Trade Partnership for $168,000 that covered company tuition of $5,000, another $3,000 assisted in marketing (typically Website development).

The initial program targeted the six northern Vermont counties. Dick Morse, VMEC Director of Business Development, said they want to go down to the southern part of the state in 2015. 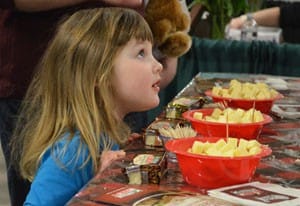 The program is intensive and requires developing an export plan. The companies are required to participate in three day-long sessions over the course of three months. The fall session concludes November 12. There is a maximum of eight companies that can participate in each session to keep the program tight and the benefit to the participating companies high.

Morse said most of the companies who participate already have some export sales, but it’s mostly serendipitous and, as Horseman says, potentially problematic. For instance, the US Department of State has a long list of entities (countries, people, even just addresses) that a US company cannot sell to. To do so would be to commit a crime. Yet how would a company even think of such things when someone just shows up at their Website? ExporTech, he said, helps navigate the many mines in the minefield.

The need for foreign sales is significant.

According to e-forecasting.com (see page 20), the latest trade statistics show that foreign sales from Vermont exporting companies fell 0.6 percent in August, following a decrease of 6.2 percent in July, to $295.9 million worth of goods leaving Vermont for international markets. Year-over-year, exports were down 22.1 percent.

US exports stalled in August to $138.8 billion, which was unchanged from July. Vermont ranks 49th out of the 50 states in exports. The global economy is generally not doing as well as the US economy, and therefore the demand for US goods is down.

While these statistics suggest Vermont is on par with the rest of the nation because of its size and that global stagnation, the influence of IBM’s chip making plant is out-sized in Vermont exports. Much of what the Essex Junction plant makes is exported, which skews the numbers here, though the exact number is not made public.

But despite the issues, the foreign markets are immense compared to Vermont. The ExporTech process gives participating companies a “reasonable chance to succeed.”

Cabot, for instance, has found a new use for what had been a waste product. Whey is one of the byproducts of making cheese. At one time it had to be disposed of, maybe it was spread on farmers’ field for fertilizer.

Now the dried product is sent to many places for use in baby formula and sports drinks because it is an excellent source of protein. This is done in the US and now it’s also shipped in foreign markets, especially in regions of the world where there is little dairy production, as in the Middle East.

Vermont Teddy Bear markets to the US by blitzing Valentine’s Day and Mothers Day, holidays which don’t exist in most other parts of the world. The US is holiday heavy compared even to England.

Teddy Bear uses 800-numbers and floods the airways with radio spots before holidays, which are marketing strategies largely unique in the US. They put an air hole in the box so the bear can breathe and they have a bear “hospital.” All this may be as foreign to an international customer as their cultural traits might be to us.

What exports also offer, besides just sales, is a smoothing out of financial ups and downs domestically. Different holidays, like “Coming of Age (seijin no hi)” in Japan (which has many festivals and holidays including the usual Western ones), or different seasons in the Southern Hemisphere can smooth out revenues streams.

Besides being a natural exporter, a Vermont company “must have meaningful uniqueness,” Morse said. “So, what makes you different?”

Vermont is unique and the small size of the state’s manufacturers is ideal for this program. If a company can add just a few employees through this, then that will positively impact the local economy, he said.

“ExporTech has opened many doors for our company. In addition to the knowledge we have gained during this experience, we have acquired resources that will continue to aid us as we grow our export business,” said Sarah Gallant in a testimonial for ExporTech. She is the Supervisor, Export Logistics, for Agri-Mark, Inc. Cabot Creamery.

Simon Doran, Sales Manager, Superior Technical Ceramics, said in a testimonial: “ExporTech gathered in one place the State and Federal government resources that are available to help small Vermont companies supply export markets. It was an eye opening experience to see first-hand the help ready to support Vermont business succeed. Interacting with the other participating companies emphasized that we are not alone in the struggle to be successful at exporting. Hearing the stories of their experience, successes and mistakes, was an important factor in the success of this program.”

Horseman said ExporTech offers a customized, detailed roadmap. Those companies who have already had a taste of foreign sales are likely candidates, but maybe they’ve just been sitting back.

“It gets them from being reactive,” he said, “to proactive.”

Vermont businesses, he said, are willing to share their experiences overseas with others. While actual results may take 6-12 months and NIST will do a data-driven report later, a survey given to the spring participants gave the program a 4.8 out of 5.

Morse said they target small manufacturers because that was for whom the original program was intended.

These jobs tend to have better wages and better benefits, he said.

While the Vermont brand can add 15 percent to the value of the same product made elsewhere in the US, that cache in some cases extends overseas.

“These companies may come to find that the Vermont brand has value that they might not expect,” Horseman said.

A good example is Trow and Holden, which makes stonecutting tools in Barre. They were already at about 30 percent of their sales in exports, in part because the Vermont brand extends to Norway.

Not all SMMs (small and medium sized manufacturers as NIST calls them) are a perfect fit for this program and some who would fit might need time to prepare, Horseman said. For instance, a small company might not have the employment capacity to handle more work, or may have conflicts with tradeshows that coincide with the program.

Horseman said that a company must have a dedicated foreign sales staff for this to succeed.

“You don’t dabble in international trade,” Horseman said. “You have to put both feet in.”

He said they are frank with companies about whether they are ready and able to participate. One important question to answer in this process is, what’s been holding you back – cost, no available labor or time, fear of failure?

“Most of the consumers in the world are outside the US,” he said. And regulations might not be as onerous as they are in the US.

While China is the 700-pound gorilla, Western Europe alone is about the same population and GDP as the United States.

“Our work at VMEC is really about relationships and it really works well in Vermont because we’re all connected,” Morse said.

“Our partners are key,” he said, “We couldn’t do it without them.”

According to the NIST Website, ExporTech is a national export assistance program that helps companies enter or expand in global markets. Jointly offered by the NIST Manufacturing Extension Partnership (VMEC is the local MEP) and the US Export Assistance Centers of the US Department of Commerce, ExporTech applies a structured export strategy development process that assists 4-8 companies to accelerate growth. It is the only national program where each company develops a written export plan that is vetted by a panel of experts upon completion.

ExporTech connects companies with a wide range of world-class experts that help navigate the export sales process. The result is that companies rapidly expand global sales and save countless hours of effort.

Since 2007, over 100 ExporTech programs have been delivered in 29 states with over 575 participating companies. The average sales increase is $770,000.

ExporTech provides companies with a systematic process for entering or expanding in global markets and connects them with the best international business experts in the region. The program assists participants in developing a peer-reviewed export growth plan in 12 weeks, quickly moving them from planning to closing export sales. The program involves a unique combination of innovative group sessions and individualized coaching.